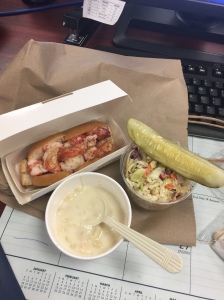 Ive been working in the Wall Street area for many years and finding a decent, tasty,  nutritious and affordable lunch has never been easy.  Its either fine dining or Chinese takeout.  Today I found Luke’s Lobster on William Street.  They specialize in lobster, shrimp and crab rolls.  And, for a mere $25.00, you can enjoy a special meal deal!  A lobster roll, a cup of clam chowder and a side of slaw.   YOLO!  I grabbed my non-descript brown paper bag and headed back to my office.  The bag seemed very light for that much cash!  Once at my desk I laid out my lunch.  Not much to say for a visual but the freshness was very apparent.  The New England style clam chowder was clean and smooth, not heavy at all.  The clams tasted as if they were plucked out of the ocean minutes before I arrived. The potatoes had the proper amount of bite and the creamy broth was seasoned perfectly.  I would go there just for the soup.  The lobster was tossed very lightly in an herb dressing paying close attention as to not cover up the delicious meat.   The “roll” was a traditional toasted white bread roll that had been slathered with butter.  No surprises here, the first bite delivered as expected.  The lobster was firm indicating that it was cooked correctly.  The seasoning complimented the lobster without hiding the flavor.  The crunchy buttery toast was very good too!  The side of slaw was the biggest surprise.  It was fresh and vinegary just like I love it!  A little sweet and just the right amount of sour to balance.

As I paid for my lunch, I was handed a loyalty card.  Buy 10 lobster rolls and get one free!  I don’t know if I’ll make it that far, but Im holding on to my card just in case!